Home > Your Next Masterpiece: You. 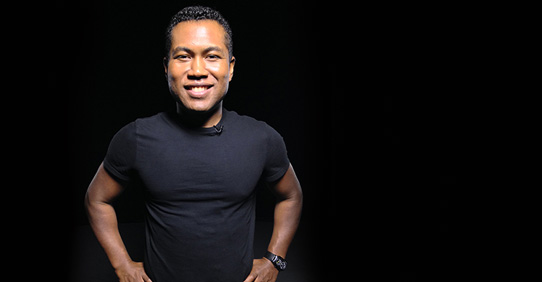 Cheryl Esposito welcomes Kute Blackson, a new generation firestarter inspiring a global revolution in Consciousness. A gifted orator, musician, and transformational leader, Kute’s passion is helping you reveal your passion and live it.

Raised in Ghana, the son of a revered spiritual leader, Kute has a presence that inspires. He was age 8 the first time he spoke in front of 3000 people with his father by his side. By age 18 with speaking appearances in over 300 venues, Kute was getting restless. Having the courage to choose his own way in the world rather than step into the role that awaited him as his father’s successor, he left for the U.S. with “two suitcases and a dream”. He knew he wanted to help others live their own truth, not the truth that anyone else had created for them. “What are you pretending not to know?” Kute asks as he takes you on a transformational journey to dig deep and tell yourself your truth. He dares you to “pick up the instrument that is your heart and play it fully.” There is liberation in being who you are meant to be, rather than living the story that others have created about you. Whose life is it, anyway?
Join Cheryl Esposito & Kute Blackson in creating your next masterpiece: YOU!
Missed the Show at 10am?