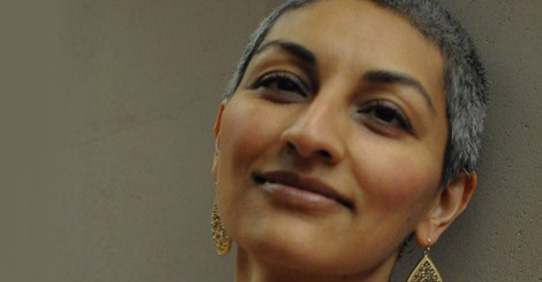 Growing up in Kenya Shailja experienced the impact of war on the lives and spirit of the people. Her path took her on a journey from working on Wall Street to living a monastic life, running non-profits, eventually finding her voice in poetry. She uses text, voice, body and critical thinking to delve for truth and dissect power. Today she is a performance artist bringing her work to people around the world. Her one-woman show, Migritude, unfolds hidden histories of women’s lives in the bootprint of Empire, from India to East Africa.
Shailja’s powerful performances bring her audiences to an introspective space, connecting with the raw emotion and impact of war and oppression, daring us to imagine a different reality. The irresistible passion and eloquence of her words touches people at their core and inspires action. I experienced Shailja on the main stage at a Bioneers Conference with a standing room only crowd of hundreds of people. Her performance was breathtaking. We were all moved so deeply – it was as if we were in a trance. The end of her performance was met with profound silence…we were unable to breathe, to move from the moment. Then at once, the entire audience leapt to its feet with applause and cheers and tears that went on and on. Shailja said, “The fifteen-second pin drop silence after I finished my performance was worth three standing ovations.” Indeed.
Words shape us. They inspire. Join the conversation with Cheryl Esposito and Shailja Patel for a conversation…inspired.

Missed the Show at 10am?
Listen to the rebroadcast at 10pm PST Pacific (1am Eastern)
Past Episodes are available On Demand and Podcast Ready.